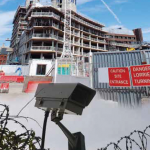 Until recent years CCTV Surveillance on temporary projects such as construction sites was impractical and very poor quality. The dramatic increase in the bandwidth of mobile networks in the last couple of years has made streaming live CCTV images from building sites possible in most locations in the UK. The recent changes in battery technology mean that we can now install CCTV where there is no permanent mains electricity.

Building Site CCTV with off site transmission is now not only possible but with the new 3G and 4G networks the image quality is pretty amazing.

For example our Lewis Trailer with 4 camera towers, 1 PTZ camera, 7 static cameras, 8 movement sensors, a digital recorder and 3G modem can now run on batteries alone. We have an eight cell battery pack that attaches to the Lewis Trailer. One of the cells is swapped out and recharged every 4 days allowing the system to run on battery power indefinitely. Alternatively the batteries can be trickle charged from a generator in the daytime and run on batteries over night and at weekends.

Well almost. Another product that has hit the scene in the last couple of years is the RSI Videofied system. This is a battery powered, externally rated alarm system with video verification. The external detectors have a built-in night vision camera and infrared LED’s. When the sensor detects movement it wakes up the camera and IR’s and records a short 6 – 10 second video clip of what caused the activation. This is then sent direct from the building site to our alarm receiving centre over the mobile phone network where its reviewed by an operator and actioned accordingly.